Cricket is a game that the British invented and the Indians mastered, they say. A hangover of the colonial British era, this sport isn’t merely a ‘sport’ in our country. Such is the passion with which it is followed that many people consider it to be their religion. Another countrywide passion of us Indians is cinema. We are a cricket and cinema crazy nation. However, a sports film about cricket is still a rarity. And a good sports film at that even more so. Lagaan and Iqbal are the two that immediately come to mind as successful cricket films. There have been a few other cricket films but none as good as the ones mentioned before. Well Done Bhalya joins the list of those ordinary cricket films who despite being about something the people of our country passionately love, ends up being rather drab and boring

What you can’t fault the film is for having noble intentions. It takes up the issue of the tribals – the original inhabitants of our country who have been marginalized and exploited for centuries together. Bhalya (Solkar) son of Shukrya (Sanjay Narvekar) is just interested in the game of cricket while his father wants him to take an education help him escape the miseries of the tribal communities to which they belong. Now, every sports film has a conflict between the bully and the bullied. Shukra and Bhalya are quite obviously the bullied, while the local MLA and his son are bullies. The local MLA harbors a hatred for the tribals, for some reason, and his son is part is already part of the cricket. Bhalya plays the sport well, but there is the big issue of giving him training so that he can be a part of the local cricket team, much against the wishes of the Gajabhau, the local MLA. 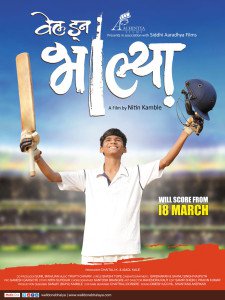 Though the film has a decent enough plot, the screenplay meanders. The very basic for a sports film is to grip its viewers with the graph of the story. This doesn’t happen with the film. It all feels very bland and boring. The film suffers from lack of detailing and simplification.

In the acting department too, apart from Sanjay Narvekar, none of the actors make any mark. It also doesn’t help that apart from his role of Shukrya there is hardly any other character that is properly developed.

A misfired attempt at making a cricket film. It is dull and boring, the worst for a sports film.