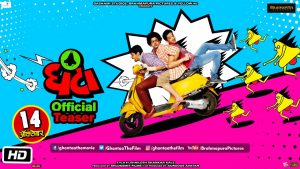 Starring, Amey Wagh, ArohWelankar and Saksham Kulkarni in the lead roles, join the three boys on Ghantaa, a laugh ride that takes you through a journey of amusement, fun and goof ups! Watch Amey as chamdi saalathe perfect Casanova, Saksham as idiot saala, the tech savvy geek out to make it big on his own and Aroh as struggler saala,the struggling dubbing artist.

The trailer of Ghantaa was launched today amidst much fanfare! An absolute mad house, this story of three boys who get caught in a hilarious state of affairs battling a politician and a bookie!

The laugh riot that ensues after the trio gets caught in a scandalous betting scam will definitely leave the audience in splits!